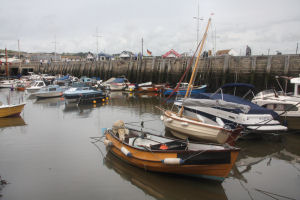 Bridport was important in the 19th century for shipbuilding and for exporting rope and nets. The harbour at West Bay is now mainly used by locals, but major redevelopment is underway.

The harbour has 102 drying moorings, the majority being let for private use. There are 15 commercial moorings for either fishing vessels or passenger vessels carrying under 12 people.

Over the centuries West Bay has been battered by the elements, baring the scars of numerous storm battles. A three year scheme to rebuild the coastal defences and harbour piers at a cost of over £17 million was completed in the winter of 2004/2005. The Duke of York formally opened the completed scheme on Tuesday, 8th March 2005.

Yachts can now be launched at any state of the tide into 1½ metres of water from the new 10 metre wide slipway. In addition, vessels with 2 metre draft are able to shelter in the outer harbour.