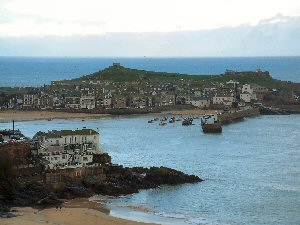 The first stone pier was not built until nearly 1500, but St Ives was probably the foremost Cornish fishing port in the middle ages. It also imported timber and beef from Ireland and charcoal from Wales. In the seventeenth century the growth of copper and tin mining in the area, and an increased local population demanding a wide variety of goods, put a strain on the harbour facilities.

The pier was replaced with a larger one in 1770 but the harbour dried out at low tide, so was not of use to large vessels; nevertheless there was a direct trade to Italy with pilchards, returning with Spanish fruit, direct importation of hides from South America and timber from the Baltic, coal from South Wales and coastal trade to Bristol. Smuggled goods were also substantial.

The harbour is now busy with many leisure craft, but dries out at low water, as can be seen under 'More Photos'.