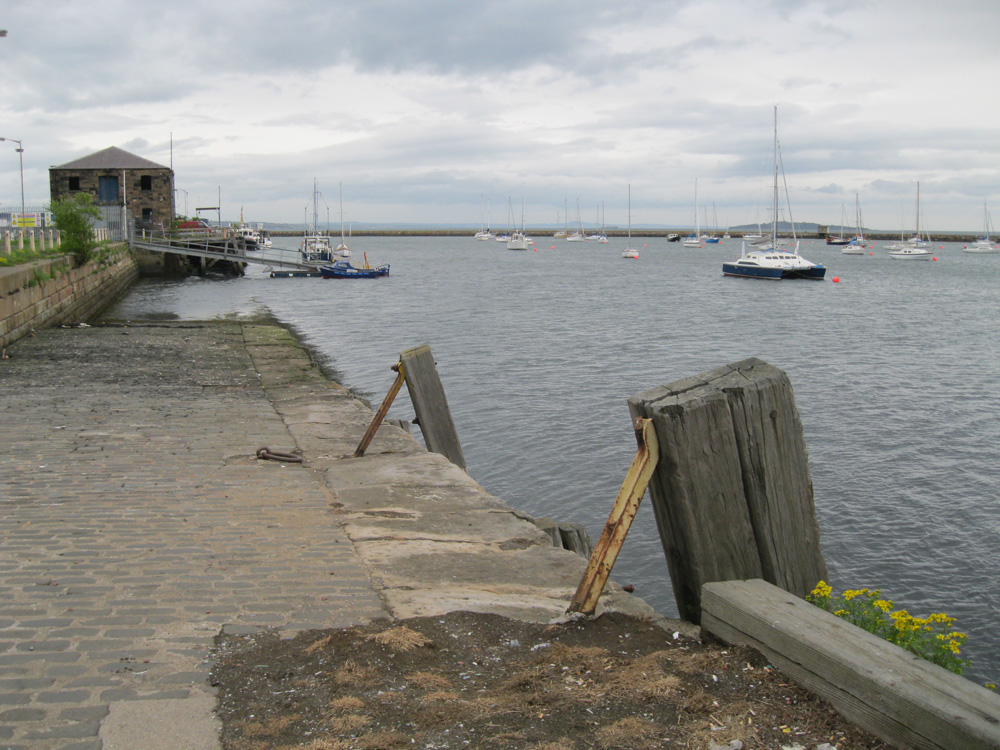 Granton Harbour lies on the Firth of Forth, about a mile to the west of Newhaven and 2½ miles to the north of the centre of Edinburgh. It was constructed to accommodate shipping too large for the small harbour at Newhaven.

The building of the Central Pier commenced in November 1835 and the harbour itself was begun in 1836 by Walter, the 5th Duke of Buccleuch on the estate of his house Caroline Park. The Duke had taken advice from lighthouse engineer Robert Stevenson. The harbour opened in 1838, although work progressed almost continuously until 1863, creating breakwaters and further wharves. Before the construction of the Forth Rail Bridge in 1890 Granton Harbour provided the main link to Fife and the north.

It was from here to Burntisland in Fife that the first roll-on roll-off railway ferry in the world operated from around 1849.

Passenger and car ferry services continued from Granton until about the time of the construction of the Forth Road Bridge. A new coaling jetty was added in 1937.

At one time the base for a sizeable fishing fleet, today it is reduced to almost nothing. It remains, however, the home of the Royal Forth Yacht Club.

There is no disputing that Granton is an historic harbour and has been at the hub of the industrial and commercial growth of the city for the last 160 years. There have been massive changes over that period. The shoreline to the Firth of Forth originally followed the line of West Harbour Road, and the complete harbour has been reclaimed from the estuary. The first part of the Middle Pier was opened by Lord John Scott on 28 June 1838, the date of Queen Victorias Coronation, and named the Victoria Jetty in her honour. The pier was extended and completed in 1844 and by 1863 the East and West Breakwaters were completed. In 1881 the first Ro-Ro train ferry service in the world came into operation from Granton to Burntisland, allowing a direct rail link from Edinburgh to Dundee, without leaving the train. Prior to this link, passengers travelled from Waverley Station to Granton by train, then by passenger ferry to Burntisland before joining a further train to Dundee. It was this very service on Sunday 28 December 1879 that was involved in the Tay Bridge disaster, with the loss of 75 passengers and crew.

The Madelvic Motor Company was founded in 1898 by William Peck, who was Astronomer Royal for Scotland, and it is acknowledged that the Granton works was the first purpose designed car factory in Europe. Parts of the offices and factory still exist within the United Wire complex at Granton. In 1905 the Scottish Motor Engineering Company set up a factory at Granton Harbour to construct "Granton" trucks and chain-driven buses. 1909 saw the erection of storage tanks on the West Pier for the Anglo-Saxon Petroleum Company. In 1912 reclamation started along the shore between Middle and West Piers for standage for coal wagons from the Caledonian Railway Company. In 1921 an Ice Factory was built on the Middle Pier to serve the fishing industry. A massive coal conveyor was completed on Middle Pier in 1943. In 1961 further reclamation commenced in West Harbour for industrial and warehouse development and the harbour played its part in North Sea Oil fabrication and service industries.

All of the major industries have now gone. Some like the Madelvic Car Factory lasted only two years, others for several decades. Fishing, oil, esparto grass, coal, small craft building and repair, have come and gone, and Granton Harbour has survived and adapted. The loss by fire, of the Peebles Factory in Pilton Road rendered the ageing heavy lift berth redundant, but thankfully Forth Ports were able to offer VA Tech Peebles an integrated site in Leith for manufacture and load-out, which became operational in August 2000. The local jobs have been saved and the company are set to grow to meet new market opportunities from the state of the art premises in Leith.

In its heyday, Granton Harbour was a bustling, noisy, hive of industry, with constant train arrivals, commercial vehicle deliveries, coastal shipping, tankers, trawlers, ferries and cranes. Lower Granton Road even managed to carry trams as well as buses and vehicular traffic alongside the railway embankment. In 1971 around 30,000 people lived in the Granton area. By 1991 the population had dropped to just over 18,000 people.

Just as sail gave way to steam, Granton Harbour has adapted to changing needs and has turned full circle back to sail, as a leisure harbour. Granton has enjoyed several royal landings over the years. Queen Victoria and Prince Albert landed at Granton Pier on 1 September 1842 from the sailing yacht Royal George, and the Duke of Edinburgh from Britannia in June 1955 for the "Edinburgh Cup" yacht race.

Leisure sailing at Granton suffered when Port Edgar Marina opened, but the balance is now changing as the harbour is redeveloped and owners see the benefit of their vessels being located on the doorstep of the capital city, only 15 minutes from Princes Street.

There are presently 110 moorings in the harbour, plus room for 30 visitors on the pontoons, a total of 140 spaces. Currently around 100 yachts use the East Harbour. The application includes for a 360 berth marina in West Harbour, with overflow in the East Harbour for a further 140 vessels on fore & aft moorings and extension of the existing visitor pontoons, a total of 500 berths. The 200% increase in capacity allows for the anticipated growth in leisure sailing that the enhanced facilities will bring and the further expected increase in yachting that will result when the Millennium Canal Link is opened, linking the Forth with the Clyde, via the Union and Forth and Clyde Canals. Forth Ports are playing a key part in this millennium initiative, with provision of facilities at Grangemouth Docks to make the link possible.