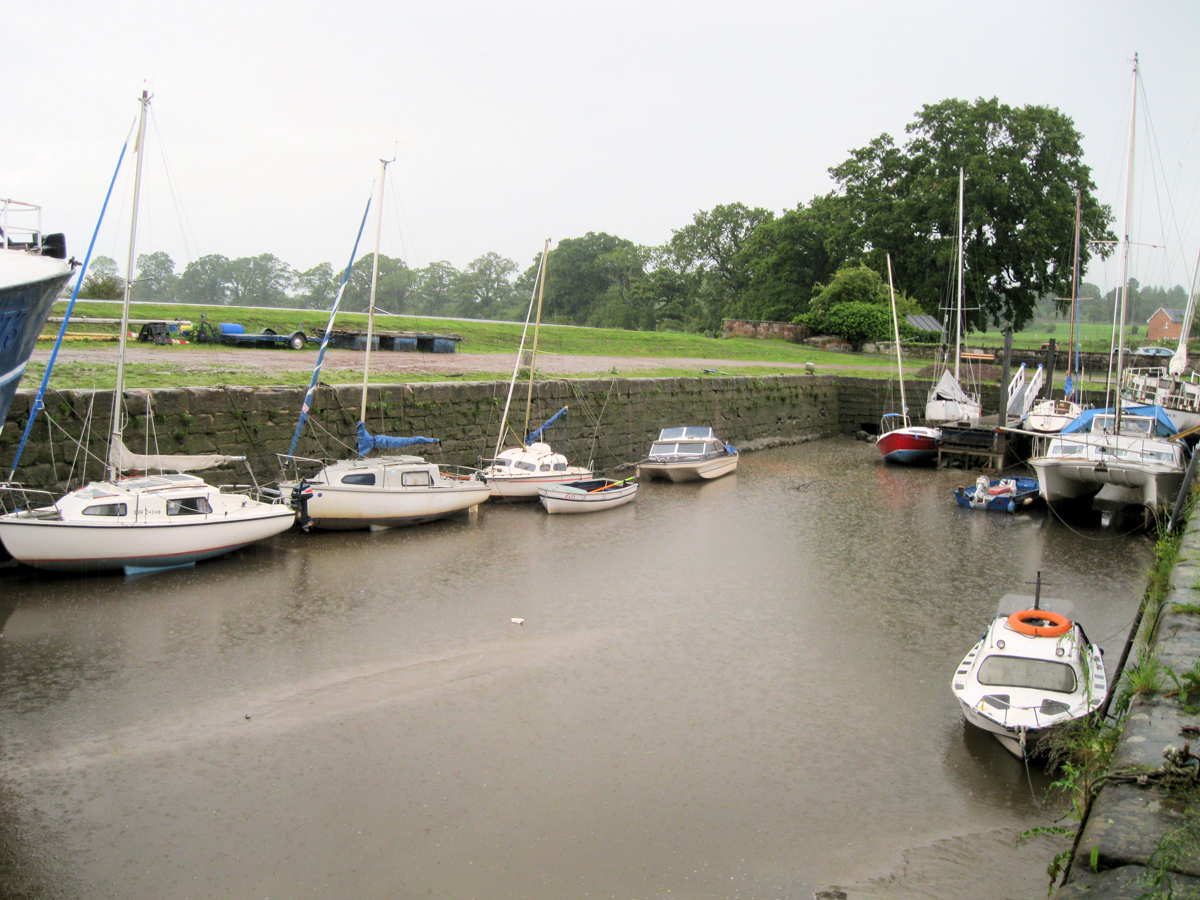 Originally part of the port of Dumfries, the quay was built in 1747. In August 2005 the 80ft beam trawler Petronella arrived at Kingholm Quay. It is said to be the largest vessel to come up the River Nith in more than half a century.

The following extract is from the Nith Navigation website:
"The port of Dumfries used to be of considerable importance. It covered Dumfries, Kingholm Quay, Kelton, Glencaple, and Carsethorn. The trade was mostly local coastal shipping, but at all times imports were greater than exports.

In the early 18th century customs records show a considerable increase in shipping, and the town had already established links with the colonies in north America. In the 1740s so much tobacco trade was passing through Dumfries that it was known as the Scottish Liverpool. Coal from Cumberland formed the largest percentage of the trade, and continued into the 20th century. Lime was another common import, but Brandy, wine, dried fruits and luxury textiles, came from France and Spain. These together with tobacco were the commodities that gave the smugglers their trade. The customs accounts of the time relate what a hopeless task it was to control it.

At the beginning of the 18th century buoys were placed on the lower reaches of the Nith and in 1710 blasting took place at Castledykes to open up the channel. There was no harbour in the Nith. In 1746 the Earl of Nithsdale gave land at Glencaple for an outport, and stone from his quarries at Bankend in return for the free passage of his goods over the toll bridge at Dumfries. In 1747 Kingholm Quay was built. In 1748 the town commissioned Milligan, the mason of Borron village to build a lighthouse at Satterness (Southerness) and this appears as a "lighthouse" on General Roys map of 1753. In the 1790s it was unlit but there was a beacon on the point. By the early 1800s the town was buying oil and paying a lighthouse keeper. Trade was brisk and destinations from Dumfries included Whitehaven, Workington, London, Liverpool, Caernarvon, Thurso, Leith, Dublin, Belfast, Cork, Virginia, New England, Rotterdam, Trondheim, Gothenberg, Malaga, Oporto, Danzig, Cadiz, Dieppe, Bordeaux and many others. Exports included grain, potatoes, and livestock.

By 1810 navigation of the Nith had become quite dangerous, and virtually impassable for vessels over 60 tons. The town decided to take action, and a survey of the Nith was undertaken by James Hollingsworth, a civil engineer, who drew up a plan for improvements in the course of the river. An Act of parliament passed in 1811 appointed commissioners to superintend the improvements with powers to borrow £16000 to carry out the work. The aim was to improve navigation so that vessels with a draft of at least six feet could come and go.

The early 1800s saw a tremendous amount of immigration to the colonies out of Dumfries, particularly to Canada. Newspaper advertisements show emigrant ships sailing regularly from Glencaple and Carsethorn. The coastal trade of the port of Dumfries was at its peak in the 1840s with almost 25000 tons entering the River and steamboats such as the "Countess of Nithsdale" plied regularly to Liverpool. However decline started in 1850 with the coming of the railway, and the cost of improvements to the channel became too great for the amount of shipping generated, ships got bigger and Dumfries became uneconomic."

Kingholm Quay at Dumfries currently offers a variety of wintering options for all sizes of pleasure craft, and small commercial vessels as well. The river has recently been dredged to facilitate access to the quay.